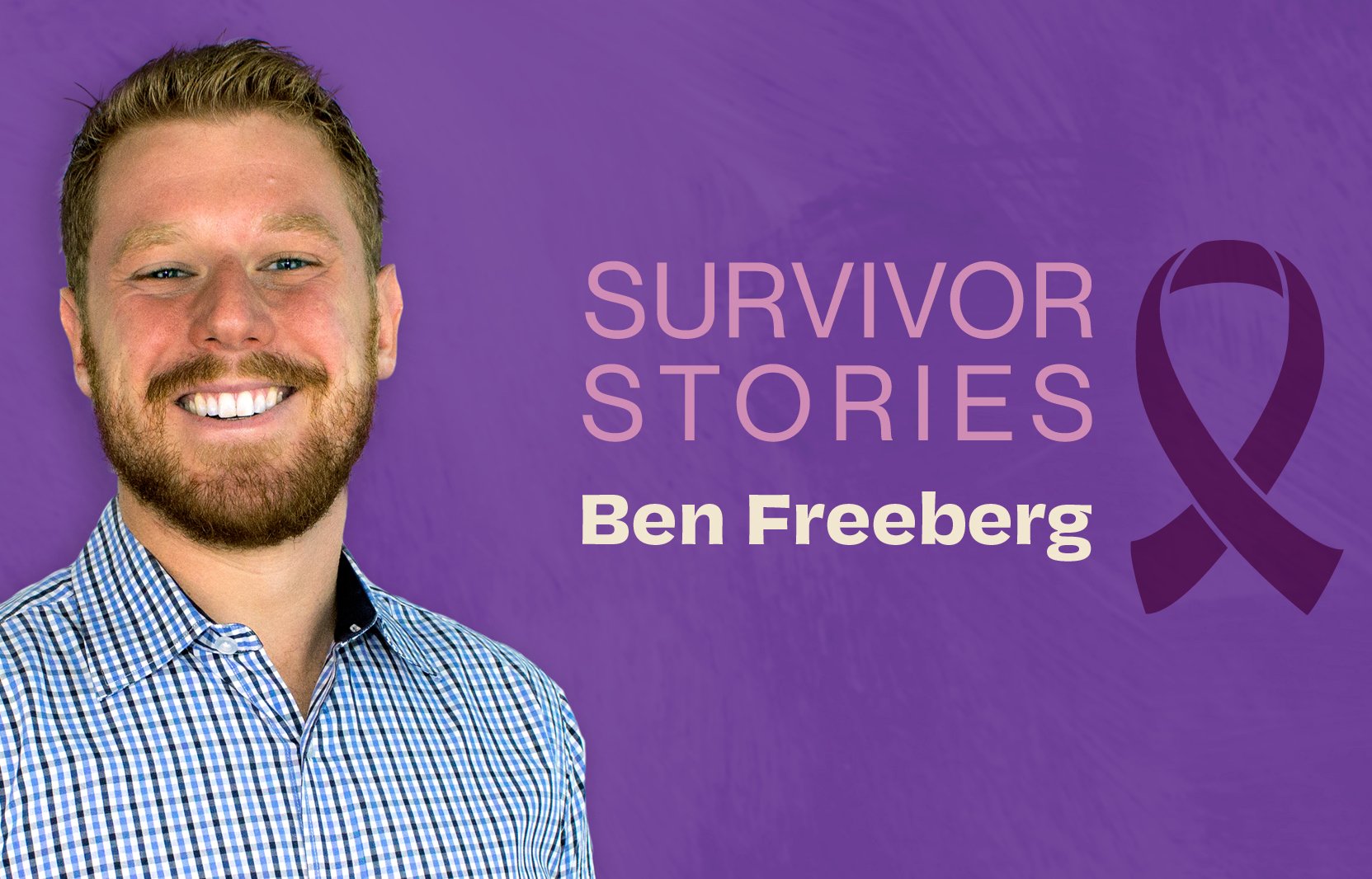 When Ben received his testicular cancer diagnosis in 2018, he took his experience and shaped his stand-up comedy routine. Read more about Ben’s positive outlook, how he found joy during treatment, and what he’s doing now to reach others.

“Turns out it wasn't too much hummus, it was cancer. Classic mixup.”

Back in 2018, Ben Freeberg packed up his suitcase and headed across the Atlantic to Israel for his Birthright trip. “It’s a free trip you can go on if you have one Jewish parent or you've seen 38 episodes of Seinfeld,” he jokes as he explains, “I went to Israel to try to get closer to God. Definitely got a little too close.”

He’d been doing something common for trips to Israel, eating a diet that consisted of solely hummus and was experiencing a terrible stomach ache. Thinking his stomach issues were the result of a new diet, he took a handful of Tums. When that didn’t work, he ended up in the ER. The reality was he’d developed a blood clot in his lungs and couldn’t breath. “Turns out it wasn’t too much hummus, it was cancer. Classic mixup.” says Ben, “Tropical flavored tums are delicious, just not an effective cancer treatment.”

Laughter: Finding joy and enjoying the little moments during treatment

There was one specific moment Ben recalls when he realized he could either be sad and down about his diagnosis, or he could make the most of it and try to laugh. That moment was right after treatment began, Ben’s oncologist walked in the room and said, “Ben, you are now going to have to follow the diet of a pregnant woman,” meaning no alcohol, raw fish, or anything where bacteria is common. Ben laughed. “I knew that if I couldn’t find a doctor telling a healthy twenty-five year old that I needed to follow the same diet as a pregnant woman funny, then cancer was going to be a long experience.” It’s this experience that drove Ben to tell his story through humor with stand-up comedy, which he says was one of the most important things he did during his treatment: “Doing stand-up comedy and trying to leverage my experience to help make other’s easier through laughter was the most impactful piece of my journey.”

Ben says he handled the treatment quite well. Of course, there were moments of stress and anxiety, but he went for walks outside whenever he was physically able to do it. He kept his day job, working in a limited capacity. “We had a party on the hospital floor,” he says, “Every night I was in the hospital, I had a group of friends and family that came to play board games, talk, and hang out. Every person in my life stepped up.”

Navigating life after cancer: How to best support your loved ones

Most caregivers want to help their loved ones with cancer, but they don’t know how. Ben’s number one piece of advice? “Don’t send messages with question marks.” He says, “And don’t ask them if they are in remission. Remission is really complicated. The percentages of recurrence change every month, for years, and most people don’t want to talk about it.”

Instead, Ben recommends sending positive vibes and love statements: “If you have some time and just show up with their favorite candy or a little gift, it will bring a smile to their face.”


New normal: What Ben’s doing now to reach others

A lot of cancer survivors try to think back to their pre-cancer life and how they can go back to some of the normal ways they lived. Ben says that is impossible. “You can’t go back to the way things were after such a big event. There is a lot of pressure to make dramatic changes post-cancer, to seize every day, be happy, and grateful you’re alive.”

Instead of trying to reach a previous version of himself, Ben’s embracing how his experiences have changed him. He made a career change, moving into the world of healthcare venture capital. “I had good health insurance, was treated at one of the top cancer hospitals in the world, had an incredible support system of family and friends, and was an otherwise healthy young guy, and cancer still sucked.” He says, “It’s nearly impossible to navigate the healthcare system when you are feeling one hundred percent. Once you are sick, that becomes unfathomable.”

These days, Ben is able to spend one hundred percent of his time focused on making the lives of individuals with cancer easier during his day-to-day at Thyme Care. He notes that even his first few months have already been an incredibly rewarding experience, “I feel like my personal experience navigating the member-side mixed with everything I have learned on the health insurance and venture capital side, combined to make this role at this company a perfect opportunity.”

We couldn’t be more proud to have Ben on our team. You’re such an inspiration, and your experience will help shape how Thyme Care is able to make the cancer experience better for our members, their caregivers, health plans, and providers in the future.

Thanks for making us laugh.

What can people with cancer and their caregivers learn from one woman’s story of breast cancer...
Read More

A New Type of Collaboration for Scaling Value-Based Oncology Care

As the son of an oncologist, I saw early on the challenges individuals and their loved ones...
Read More

At Clover health, they go above and beyond the basics for all of their Medicare Advantage members....
Read More